During an early 2017 customer visit in Quebec city, we met with a researcher who was unsuccessful at performing whole Vector Amplification. The customer was using the Q5® Hoststart Mastermix provided in the Q5® Site-Directed Mutagenesis kit from NEB. At Civic Bioscience, we don’t recommend any site-directed mutagenesis strategies consisting in whole vector amplification (read PCR Success Story #16 for the difference between 2 workflows). However, in this case, primers were already designed by the researcher to be compatible with such strategy (i.e Q5® Site-Directed Mutagenesis) and allow for site-specific deletion of a small 16 bp fragment from a promoter region cloned in a pGL4 backbone vector. One of the foreseable obstacles was the low GC content of the sequence to be amplified. We had to deal with an AT-Rich Vector

To protect the research and privacy of the customer the name of the promoter and primer sequences were slightly modified to be unrecognizable.

Previously, we had developped a new PCR setup and cycling protocol that allows for near 100% integration of all primers in only 5 -10 cycles of PCR.. This new protocol is termed Fast & Steep PCR. 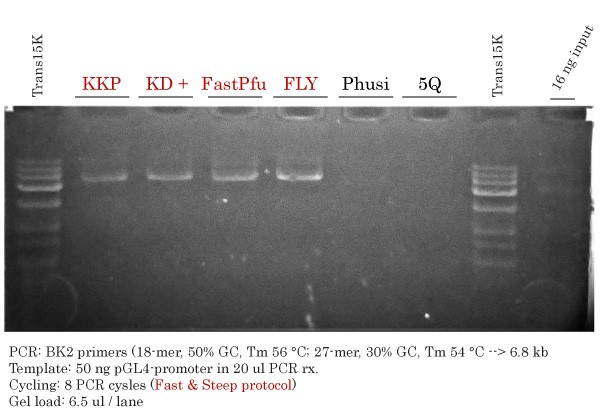 Whole Vector Amplification using the primer pair #1 was achieved using a low extension temperature (68 °C). KKP, TransStart KD Plus, FastPfu and FastPfu FLY, but not Phusion® HotStart II and Q5® High-Fidelity DNA Polymerases, successfully amplified the intended PCR band at 6.8 kb. The Fast & Steep PCR method implies that a considerable amount of DNA template is introduced in the PCR reaction. The equivalent input that would normally be seen in all samples (16 ng in 6.5 ul out of the 20 ul PCR mix) is shown on the right-hand side. Note that only 8 PCR cycles were performed, thus strongly reducing the chance of introducing undesired mutations during Vector Amplification. FastPfu FLY (Ultra-HiFi) DNA Polymerase was the most specific and efficient.

DpnI cleaves at GATC sites if they are methylated. 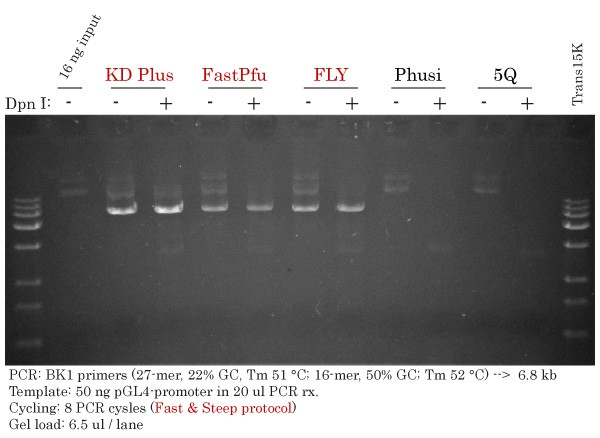 To confirm the nature of the bands observed at or above the 15 kb marker lane, 6.5 ul of PCR products were digested with DMT Enzyme (Dpn I). Indeed, agarose gel electrophoresis (- and + lanes) confirmed these bands to be the input pGL4 template as they were shifted to smaller product sizes in the (+) lanes. In addition, an undigested input template (left-hand side) strongly confirmed this conclusion.

KD Plus (Ultra-HiFi) DNA Polymerase was the most specific and efficient in Vector Amplification #2 using the Fast & Steep PCR protocol.

The difficulty of performing whole Vector Amplification was due to primer and sequence low GC-content – AT-Rich PCR. In contrast to what the researcher experienced using a competitor DNA polymerase, we succeeded at performing BOTH vector amplifications on our very first attempt. However, Vector Amplification # 2 required a simple optimization. In fact, lowering the annealing time to 20 seconds and the extension temperature to 66 °C resulted in better yield. Once more, our results demonstrate that TransBionovo High-Fidelity DNA Polymerases clearly set a Higher Level of DNA Polymerase Performance when compared to the popular Phusion® and Q5® DNA Polymerases.

Now that the PCR reactions are successful, the researcher can proceed to the second step of the Q5® Site-Directed Mutagenesis (KLD incubation).

Put us in charge !
We Will Solve It for You
← Success #19: Insertion of Stop Codons by Fast & Steep PCR Site-Directed Mutagenesis and Seamless Assembly Success #21: GC-Rich Cloning of HLA Nonclassical Class I Heavy Chain →